By DelhifundosDecember 1, 2022No Comments11 Mins Read 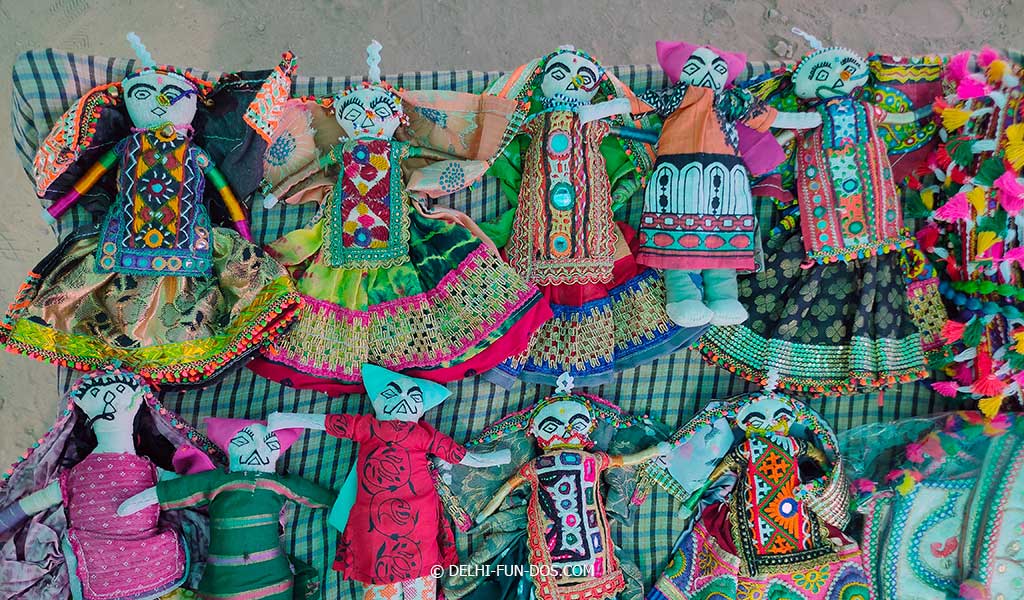 Kutch is famous for its Rann. Next probably would be its lively craft traditions. Our first brush with the crafts of Kutch was at the Gurjari, the handloom and handicrafts emporium of the Government of Gujarat. This was some 30-plus years ago. The understated elegance of the nifty handicrafts of Gujarat simply bedazzled us. Gurjari, in fact, helped to shape the aesthete of many Indian cities including Kolkata.

We were invited to the first-ever All India Influencers Conclave in Ahmedabad, Gujarat. As delegates of the All India Influencers Conclave, we visited the Rann Utsav and the breathtaking White Rann of India. Our home here was Lallooji & Sons Tent City, a seasonal set-up at Dhordo Village. We travelled around from here in Kutch. This brought us to the source of many handicrafts that we were drooling on for years.

PIN IT FOR LATER READ

The handloom and handicrafts of Kachh are mostly items that are produced in the villages. The skills have emanated from the necessity of the people here. It is only in or about the 1980s that Kutch handicrafts found markets in cities.

And now, not only India but also the whole world looks out for these crafts.

How many crafts are there in Kutch?

This question has no answer. Kutch is spread over 45000 km with many villages that are inaccessible or are in remote corners. Moreover, most crafts have a cycle. Many crafts die due to lack of utility and new crafts take their place. Moreover, the devastating Gujarat Earthquake of 2001 created havoc in this region. Like all other sectors, handloom and handicrafts also took a beating. Over time, there was a resurgence in this region and many craft practices were revived. Nonetheless, it is nigh impossible to keep track of the accurate number of handicrafts in Kutch.

That being said, luckily many skills have traditionally been handed down from one generation to another. These craft forms have stood the test of time. We were lucky to have come across such craft practices here some of which have been practiced for 500 years. Thankfully, most of these crafts have now been recorded and extended protection by the Government of India as GI under The Geographical Indications Act. One hopes this would help to preserve the traditional knowledge of this region.

Crafts of Kutch at Rann Utsav

Our Rann Utsav itinerary was full of surprises. From the Rann Utsav Tent City, we visited many parts of Kachh where artisans lived and practiced their craft. You may or may not be into traditional handicrafts, but given their stories, rustic and humbling, you can’t but get interested.

If you eat non-vegetarian, there are high chances that you are familiar with the dish Rogan Josh where the meat is cooked in a lot of oil. Rogan paintings and Rogan art have oil in common. Rogan painters use oil based to create intricate designs on fabrics. At first glance, it looks embroidered. If you look closer, you realize it is a kaleidoscope of paint. 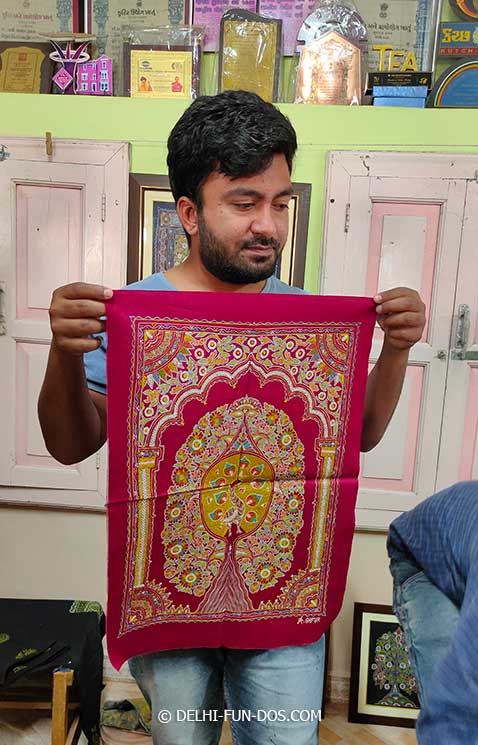 Tree of Life Rogan painting was gifted to Barack Obama, then president of the United States

Most of the samples of embroideries from Gujarat are actual pieces of work from Kutch. The embroidery here is of a very distinct style using little pieces of glass or other reflective objects and stitching nifty designs in bright colours. Red, yellow, green, blue, and black brightens the fabric. The end result is gorgeous yet not gaudy. 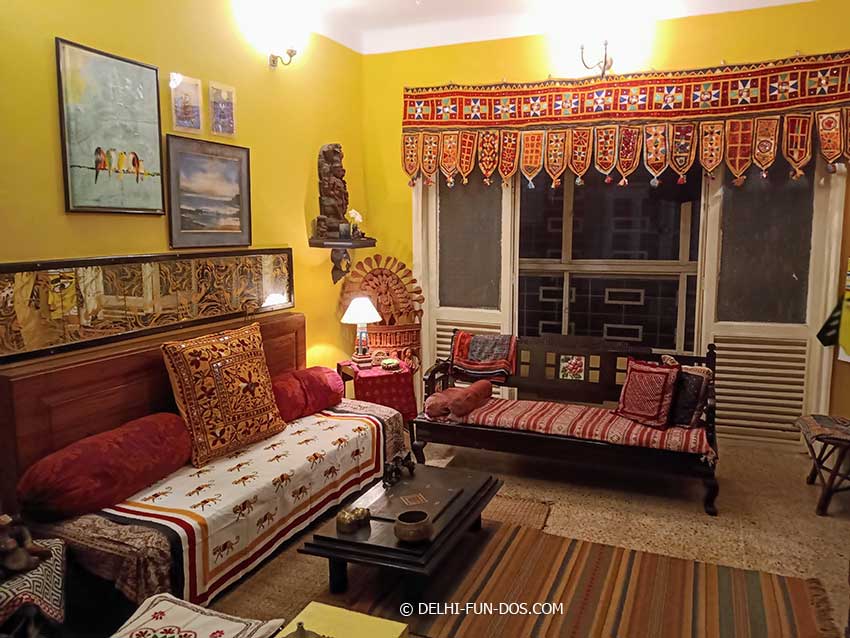 This craft has been practised by women of local tribes for centuries. Ahir, Meghwal, and Rabadi women use such embroidery on their long skirts, blouses, valance or torans, cushions, and belts. Kutch embroidery has been used for home as well as trading purposes for a long time. The Gujarat Government trade channel Gurjari made these items popular outside Gujarat. 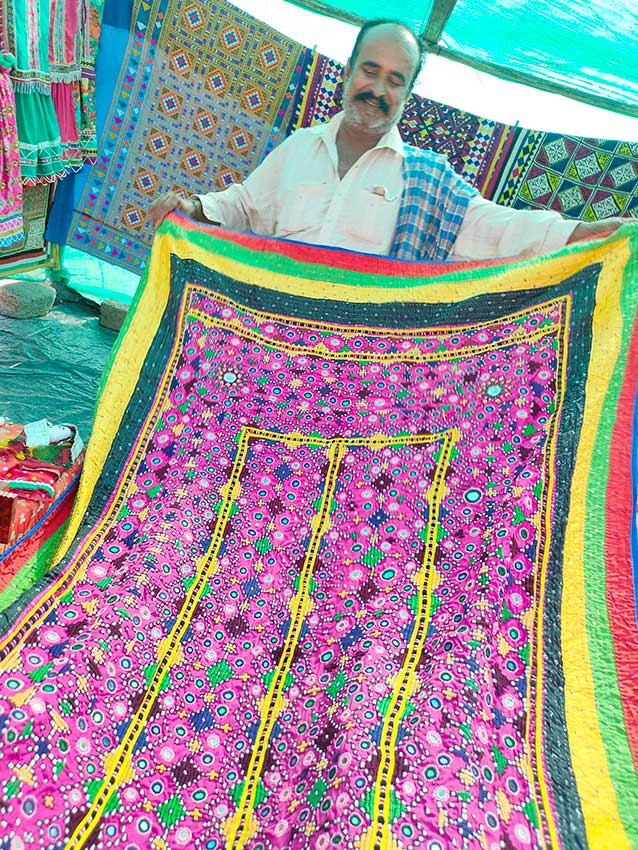 When we went to Gandhi nu Gam in Kutch, many houses had such items hanging for sale and we bought some pieces for the home. When hung, these pieces had a transforming effect. 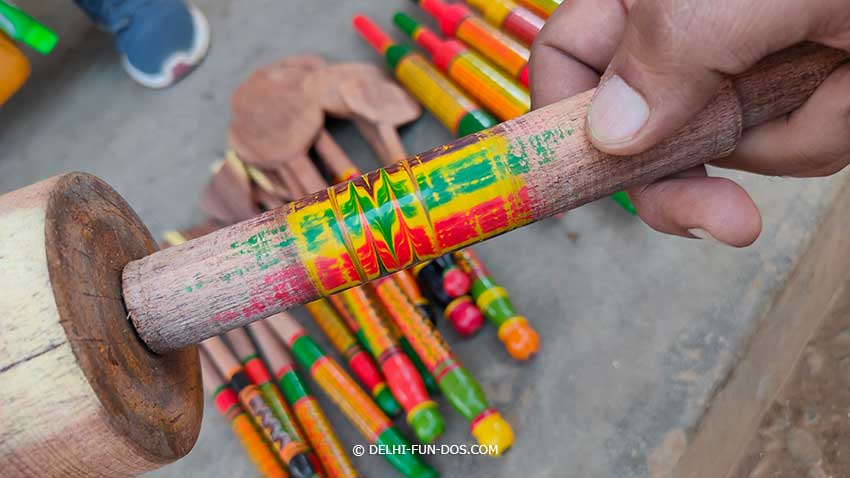 Colour in Kutch is not restricted to bright clothes but permeates every walk of life including kitchenware. During our trip to Manali as part of the “Unravel Travel” project, we saw a very beautiful rolling pin in the kitchen of our host at Panchkula. When we came to Nirona, we saw these being made at a humble dwelling of a lacquer artist.

A few artisans here make wood ladles, spatulas, and rolling pins and then apply a bright coating of colour. The dye is a combination of natural stones and lacquer that gives a glazed finish. We saw the items being made using mostly the lathe machine. Once the item is carved, the dye is applied so fast that a zigzag pattern is created automatically. The final product is a piece of art. Such kitchenware is a great addition to brighten the spirit in any dull kitchen. 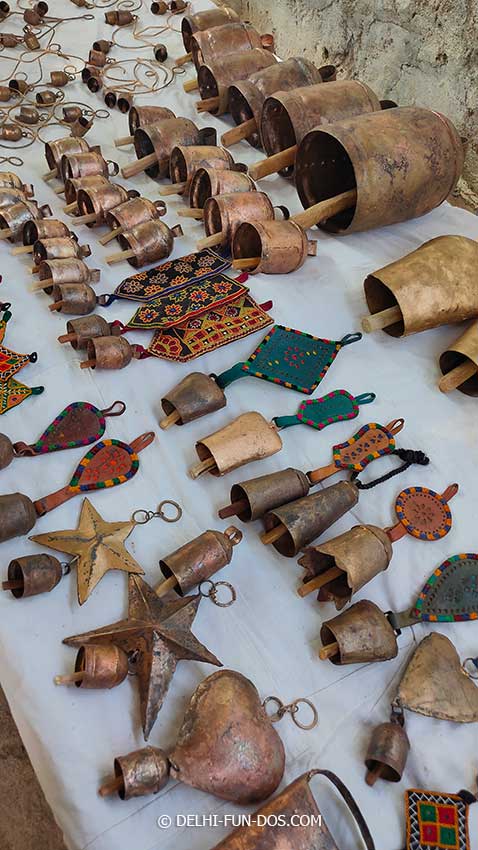 The philosophy of art in life has guided Indian craft traditions. Traditionally, copper bells are tied around the neck of cattle to locate where they are while grazing or if they are lost. These humble copper bells are now converted into beautiful décor items in the village of Nirona, near Kutch.

The Luhar (blacksmith) community here has been continuing this craft for generations. We visited a workshop and saw how a bell was made. It was news that there were no holes or pins used while shaping a bell. It was just through hammering sheets. The bells are now used for a variety of purposes such as heart-shaped chimes and key tags. The most surprising innovation was this percussion musical instrument created by placing bells of various sizes one after the other. When we played it, the impact was extremely melodious even to our untrained ears. 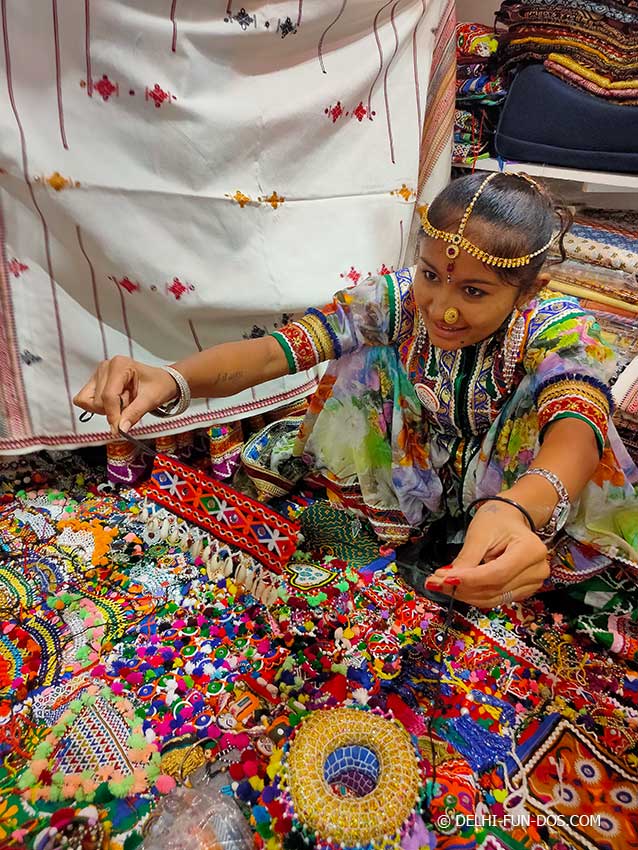 The village women in Kutch, especially the Rabadi community, create simple or elaborate pieces using colourful glass beads. These look almost woven and range from necklaces, earrings, and headcovers to purses, coasters, wall hangings, and valances. The predominant colour is white which offsets the red, yellow, green, and blue beads. The ultimate product is magical.

Bead ornaments are part of women’s outfits in Kutch. They also make these for selling in the market. We came across many such bead items at Gandhi nu Gam. These looked so pretty on the young girls here. Recently we came across a stall at India International Trade Fair (IITF), 2022 set up by them. The girls were still dressed in their traditional skirts and were meticulous with their head ornaments. They drew a lot of attention and were a shutterbug’s delight. We got nostalgic about our trip to Kutch and bought some gifts from here. 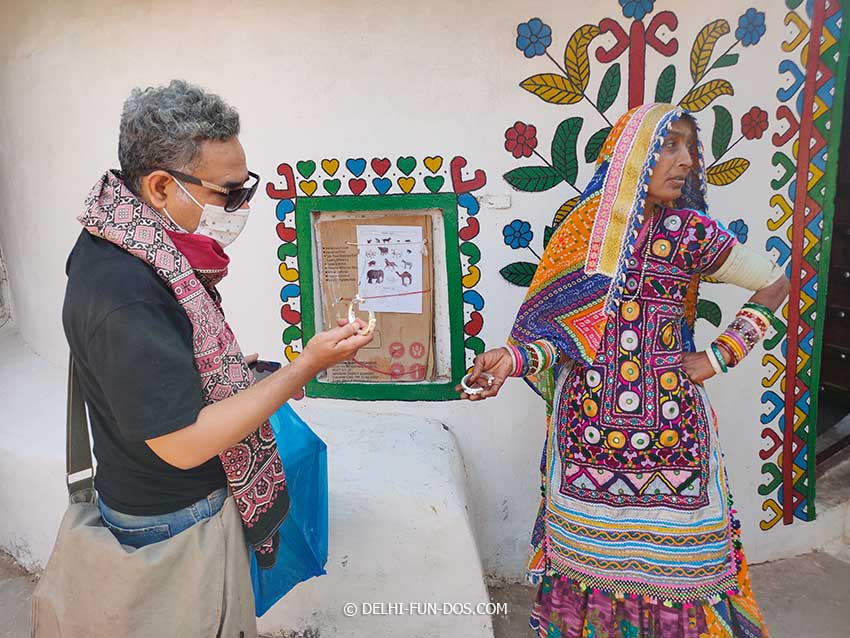 India has been a land of maximalist approach. Women, as well as men here, have been wearing a lot of ornaments, and Kutch inhabitants still follow that tradition. We found people here wearing heavy bangles and necklaces made of silver. These seemed to suit the men, women, and children so beautifully!

People from other parts of India, especially Indian cities, enjoy such aesthetics these days. The villages of Kutch are therefore a good spot for this kind of ornament. The silver ornaments here are inlaid with red, green, and blue glass pieces that reflect light. One can see a complete designer approach in such crafts traditions. 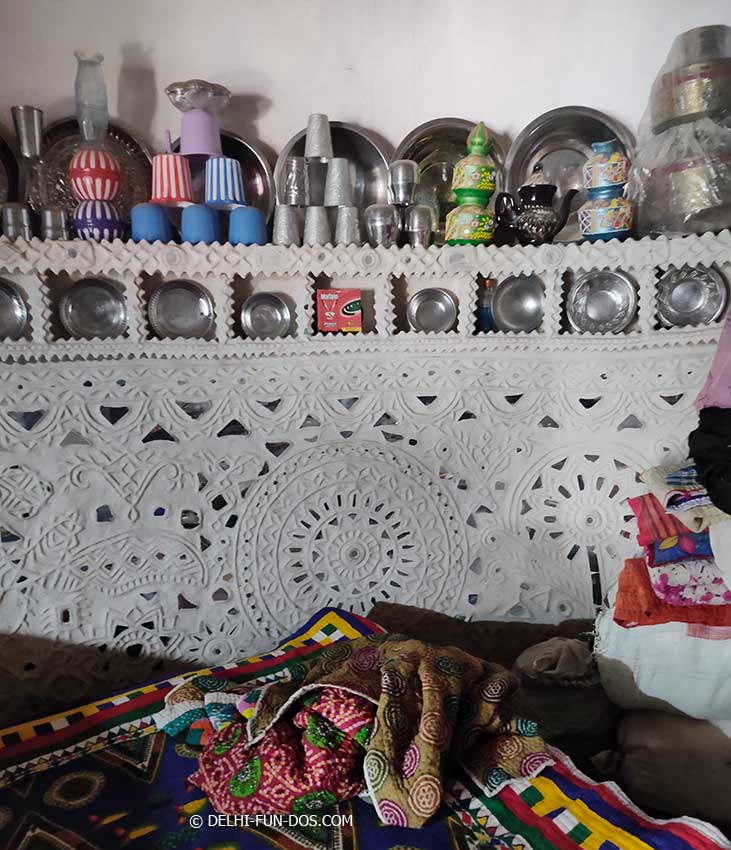 Bhungas, the village houses of Kutch are traditionally cylindrical to make those cope better with earthquakes. The outside walls and more so the inside walls of these houses are decorated with mud-relief work called Lippan Kaam. Lippan means applying layers of mud. Intricate designs are created on the walls using the pinching process.

The lippan designs traditionally have a lot of mirror inlays. The purpose of the mirrors is not only to enhance the designs on the wall, but to amplify the light, traditionally from oil lamps, but now with electricity.

Lippan Kaam is now used to make installations or wall hangings on wood boards. If you wish to hang a piece of Kutch on the wall, you must procure a piece. 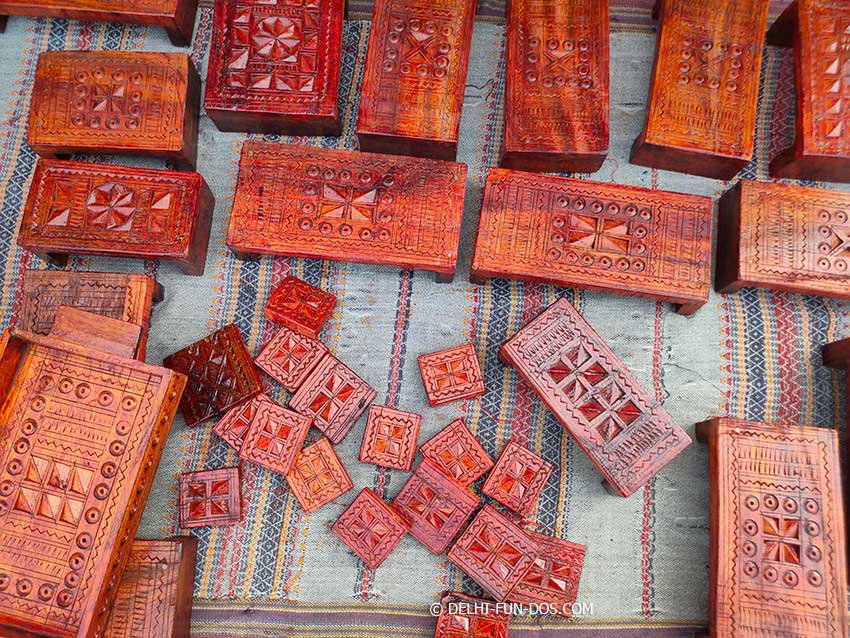 Kutch is well known for its wood carvings. We met many artisans in Kutch. The carved dowry chests at Gandhi mu Gam were just grand. The furniture they make here are simple lines and we mostly saw geometric designs. But the little niches and colourful mirrors and other reflective material inlay make these pieces of art.

The chests were particularly enchanting. We had seen such items at lifestyle stores in Delhi and Kolkata. And now we were overjoyed seeing the source. If we did want to buy something like this, we would surely get in touch with the artists at Kutch.

Buy directly from the artisans of Kutch

We would prefer to directly source an article from the artisan than buying it from a lifestyle store in Delhi. Many of the products that we saw at Kutch are available in the cities too. However, we have always preferred buying directly from the artisans. The primary reason is that there are many agents involved between the artisan in a village and the consumer in the city. These middlemen may sell an item at a high price but very little of that amount is passed on to the artisan. When you buy directly from an artisan, they get due compensation for their craft. 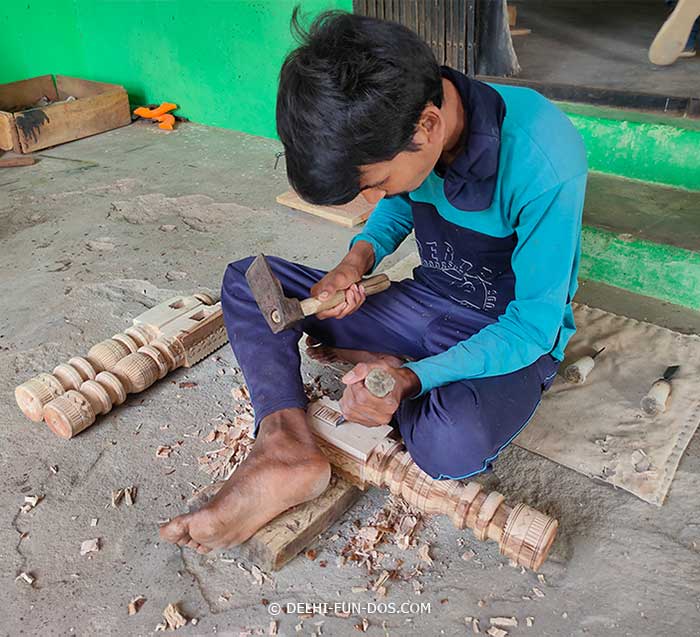 Buy directly from the artisans of Kutch

Moreover, if you buy from the artisan directly, you can customise an item based on your taste or requirement. This applies to clothes, furniture, artifacts, and so on. Not only would you be getting value for your money, but you would also be the proud owner of a unique piece created just for you.

Last but not the least, we love the experience of buying an item from the source. Interacting with the artisan and seeing the manufacturing process creates a better understanding of what we are buying. It also aids in our respecting the craft and creating travel stories for life. 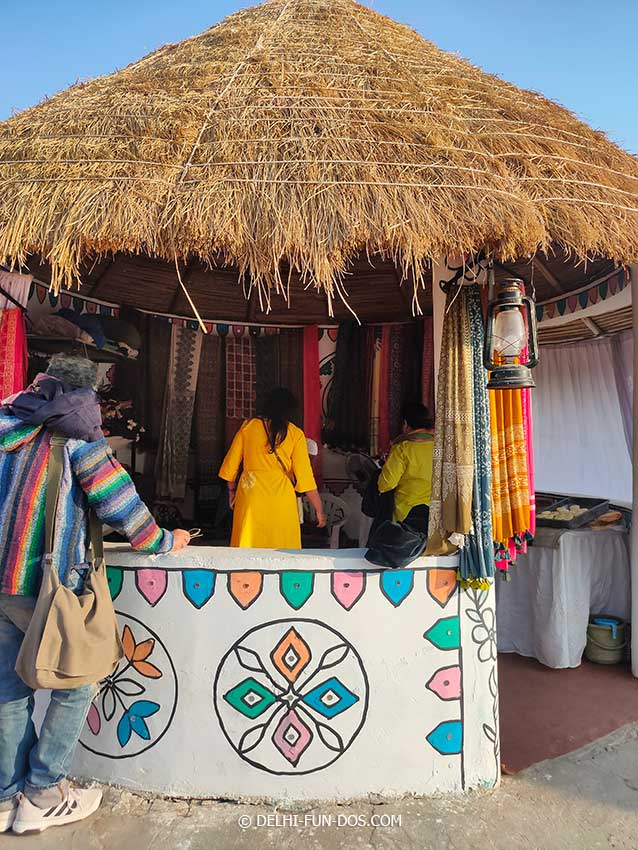 A Handicraft stall at Rann Utsav

If you are visiting Rann Utsav but are unable to make it to the crafts villages, we found many stores inside our Tent City. Artisans from surrounding areas were selling clothes, ornaments, copper bells items, and so on. These were reasonably priced as well.

Last but not least, we found machine-made imitations of handicrafts and weaves being sold to hapless customers. Unless the customer could identify themselves, they were not being informed that the items were copies. The customers landed up paying a steeper price befitting a handmade item for just a machine-made copy. Especially block print fabrics and clothes made therefrom, embroidered goods and ornaments were more vulnerable to faking. So beware.

Your best bet in such cases is to shop with an expert. If that is not possible, government-run craft emporiums are safest for authentic handmade products at fair prices.

Kutch handicrafts are not only aesthetically pleasing, but the effort is also evident when you see a piece. Kutch textiles on the other hand are sought after and are worthy of heirlooms. Rann of Kachh is therefore one of the most crafts-rich regions of India. In Kutch, we could see another India, its culture, directly from the homes of the artisans.