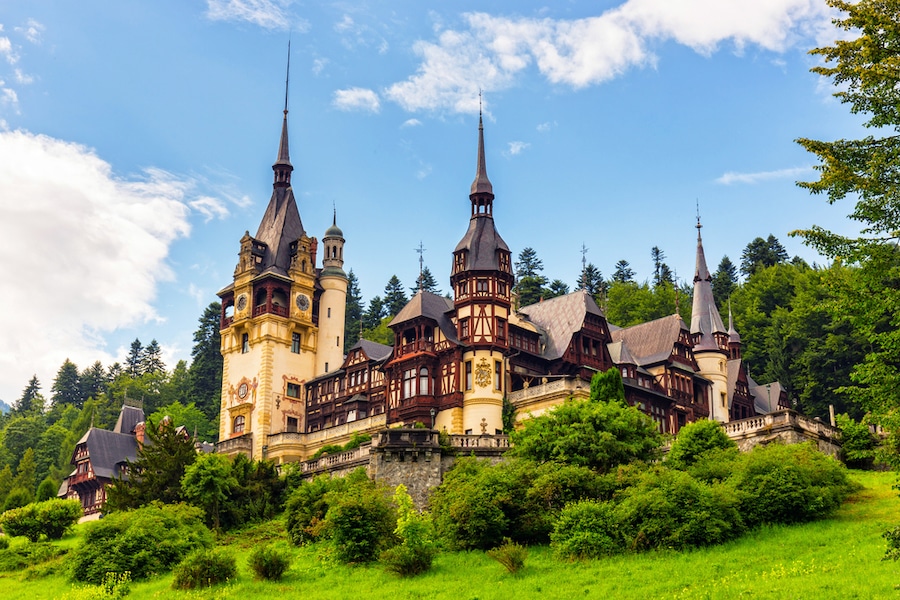 When you think about Romania, you undoubtedly think about Transylvania and all the stories and fables based around that region in the center of the country. The buildings here are large, opulent, and surrounded by beautiful green countryside. Of course, whether you believe that Dracula dwelled in Transylvania or not, there is much more to Romania than that!

One of the country’s most significant claims to fame is the sheer number of Romanian castles you will find there.

If you’re wondering how many castles are in Romania, let’s say there are several hundred! And some of them date back to the 14th century. These were built strong and to last, and for that reason, you’ll see some incredibly well-preserved fortresses all over the country.

Romania is an ideal spot for you if you’re a huge history lover. Many of the most beautiful castles in Romania have UNESCO World Heritage status and are surrounded by villages, rolling hills, and architecture that hints back to Saxon and Medieval times.

To narrow your choices down a little, here are some of the best castles in Romania we suggest you check out.

In the region of Sinaia, Romania, you’ll find Peles Castle. The castle was completed in 1914, so it’s not one of Romania’s oldest castles, but this large fortress is one of the most beautiful, for sure. The mountain scenery, with the Carpathians surrounding the building, really compliments the sight before you.

It was initially built as a summer residence for the royal family and retained much of its luxury. Inside the castle, you’ll find countless artifacts from across the globe.

Macea Castle was built by the Csernovics, a Serbian family who eventually lost the castle and passed control over to the Nagy Karolyi family. Nobody knows why the castle was lost, but it was likely due to a card game. At this time, the castle was extended, and it now stands much larger today.

While you can’t go inside the castle, you can check out the gardens, which are pretty impressive in themselves.

This is one of the oldest castles you will find in Romania, construction on this building began in 1570, and it was then renovated later by Count Stefan Bethlen in 1624.

The castle has passed hands a few times throughout history and was last owned by the Haller Family in 2003. Nowadays, you’ll find many events held on its grounds, including wine tasting! There are also many myths around the castle, and there is one such tale that there is an underground tunnel leading to a neighboring fortification.

Without a doubt, the most famous Romanian castle! The Saxons built the castle, and it is renowned for being where ‘Dracula’ dwelled!

The castle is also referred to as the Dracula fort in Romania and has that iconic medieval appearance. It has dark corridors and rooms, towers that point high into the sky, and stunning green countryside.

This is a top tourist spot because of the legends surrounding it, but we can’t take away the beauty of the building. This is a spectacular structure by all accounts! You’ll find this stronghold near the town of Brasov near the historical border with Wallachia. This is also why Bran Castle is sometimes also called Brasov Castle, Romania.

The story behind this castle is as interesting as the castle itself. At just 19 years of age, Iulia Hasdeu, a child prodigy, died from TB. Her father was so distraught he reached out for spiritual help, and the medium told him that he should follow guidance from his daughter to build a castle.

Built in 1896, the castle is now a museum where you can learn about Iulia herself and read about the seances her father held with the medium. Some people have even reported seeing her ghost!

You’ll find the ethnographic museum within the Miko Palace, but it was also a military fortress before that. The complex itself is pretty impressive, and it was built originally in the 1620s before suffering a fire during the Ottoman invasion. Fifty years later, the castle was reconstructed.

This is another of the many Romanian castles in Transylvania built to protect the region from the Ottomans. It was an ancient castle completed in 1225 and underwent several renovations throughout history, as it was damaged in various wars and invasions.

There is an interesting story about this citadel in Romania, which says that two prisoners from Turkey were ordered to dig a well due to there being no water in the area. The dig took 17 years, and you can see carvings from the Quran on the walls where the prisoners were working.

Banffy Castle has been destroyed and rebuilt so many times it’s certainly got an impressive back story! Built in the 15th century, the castle was renovated in the 18th century by a Viennese architect, only to be destroyed again during World War II. As communist rule arrived in Romania, the castle was rebuilt for the military.

With a vast 70 rooms to explore, Pelisor Castle is located in Sinaia and was once the home of King Carol I, Ferdinand, and Marie. Now you can see many artifacts, including glassware and pottery.

Unlike some large castles, this one has a smaller, more intimate feel.

Corvin Castle has a fairy tale-esque look, but it has a somewhat mysterious history behind it, making it a top-visited spot in the country.

This bloody history has intrigued people for years! This is where Vlad the Impaler was kept as a prisoner, and this imposing Romanian fortress is also connected with the Dracula legend. The castle is gothic in style and dates back as far as 1446.

If you’re looking for a scene for romance, head to Sturdza Castle! Located in beautiful Miclauseni, the castle is surrounded by a pristine and calm lake with centuries-old trees.

The castle has Moldovian roots and was built by a family high in social standing. Built in Neogothic style, the court is one of the most impressive you’ll set your eyes on and one made for peace and quiet.

While this castle isn’t anything but ruins these days, it’s certainly worth visiting for the history of the spot. An earthquake was to blame for its demise, but Vlad the Impaler once lived here, and unconfirmed reports indicate that Dracula also spent some time there.

Even to check out the ruins and the stunning views, this is a castle worth visiting.

Fagaras Citadel’s building began in 1310 and was designed to defend the Transylvania area from the Ottomans and other invaders. This wasn’t wildly successful, as in 1541, the castle was attacked and captured before being returned in 1599.

There is a bit of a bloody background to the castle, too, as it is where torturing was carried out before bodies were disposed of via a trap door into the Olt River. The castle went on to become a prison before turning into a museum, as it is today.

This particular castle has a very attractive exterior, and an artist designed it from Vienna. The castle has stunning parks and walls, and there is a slight baroque edge to the building too.

Dating back as far as the 15th century, the castle was also a hospital during 1944, during the war, before again being converted into a children’s hospital and a farm. These days, the castle is on the protected list, and a lot of work is being done to keep it in exceptional condition. You will see a lot of statues around the gates too.

This fortress may be old, but it is in excellent condition! Nine towers are out of the original 14, but the area around it still looks like it belongs to an older time. The site is large, and many buildings will give you a window to the past. Located in Sighisoara, this should definitely be on your visit list.

Cantacuzino Castle these days is a museum, and it is a very popular one at that.

You will find many heirlooms and nods to the important Cantacuzino family, and you can see paintings of them on the walls if you want a more visual take on it all. The castle was built in 1911 and is in Neo-Romanian style.

The castle belonged to the family until 1948. The architecture is stunning in style, for sure.

Overlooking the Black Sea, you’ll find Enisala Fortress in south-eastern Romania. The stunning views from this fortress and it gave troops a great view to check out possible invasions in the past.

While most of the fortress is in ruins, the five towers remain from the original building date in the 14th century.

Of course, Romania isn’t all about castles, but how can you ignore them when they’re so old and beautiful? Did we miss a castle? Let us know below.

Best Beaches In Bulgaria Along The Bulgarian Black Sea Coast

Top Things To Do In Bulgaria For Every Kind Of Traveler