With improved airlinks on the way, it should be easier than ever to get to this diverse South American country in 2023. Enhanced access will catapult Montevideo’s laid-back beaches and under-the-radar food and wine scene will top travel wish lists.

I’m a dual Uruguayan-American citizen and travel journalist who has been on the road full time for over seven years, visiting nearly 80 countries. Yet Uruguay will always be home. I’ve written about Uruguay’s delights for USA Today, Refinery29, Wine Enthusiast and other publications – in addition to keeping up my own responsible travel blog, MissFilatelista.com. 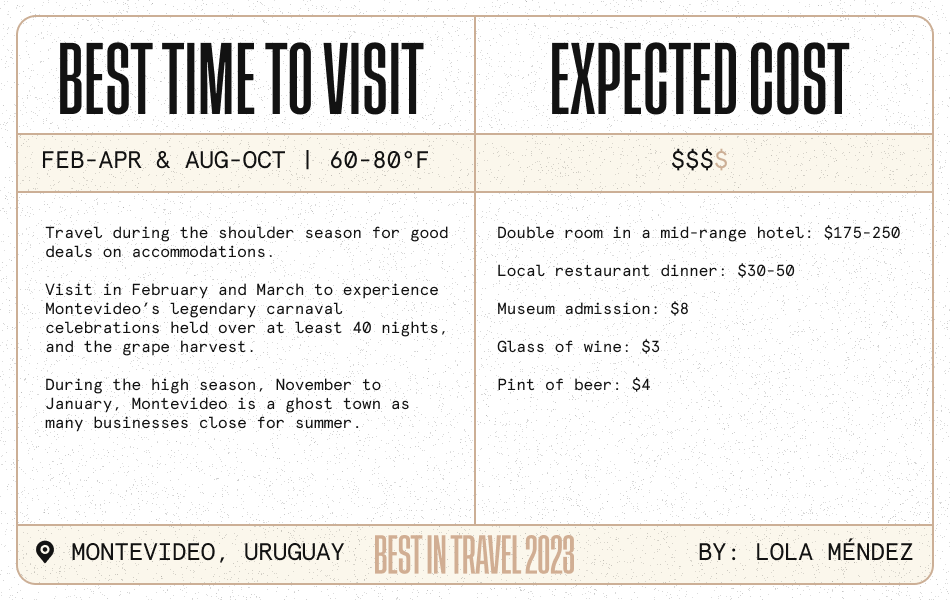 Why you should visit Montevideo

Montevideo is a metropolitan city – yet within 30 minutes you can reach the verdant campo, where Uruguay’s countless cows and sheep graze on sprawling grass farmlands. Nearby are vineyards where you can taste Uruguayan tannat and albariño varieties or a pitcher of fruit-infused white-wine sangria called clericó. Thanks to Uruguay’s 410 miles of coastline, you can enjoy freshly caught seafood in the once-fortified city that juts out into the gigantic, ocean-like Río de la Plata. It’s baffling that Uruguay is still, somehow, a well-kept secret among foodies. 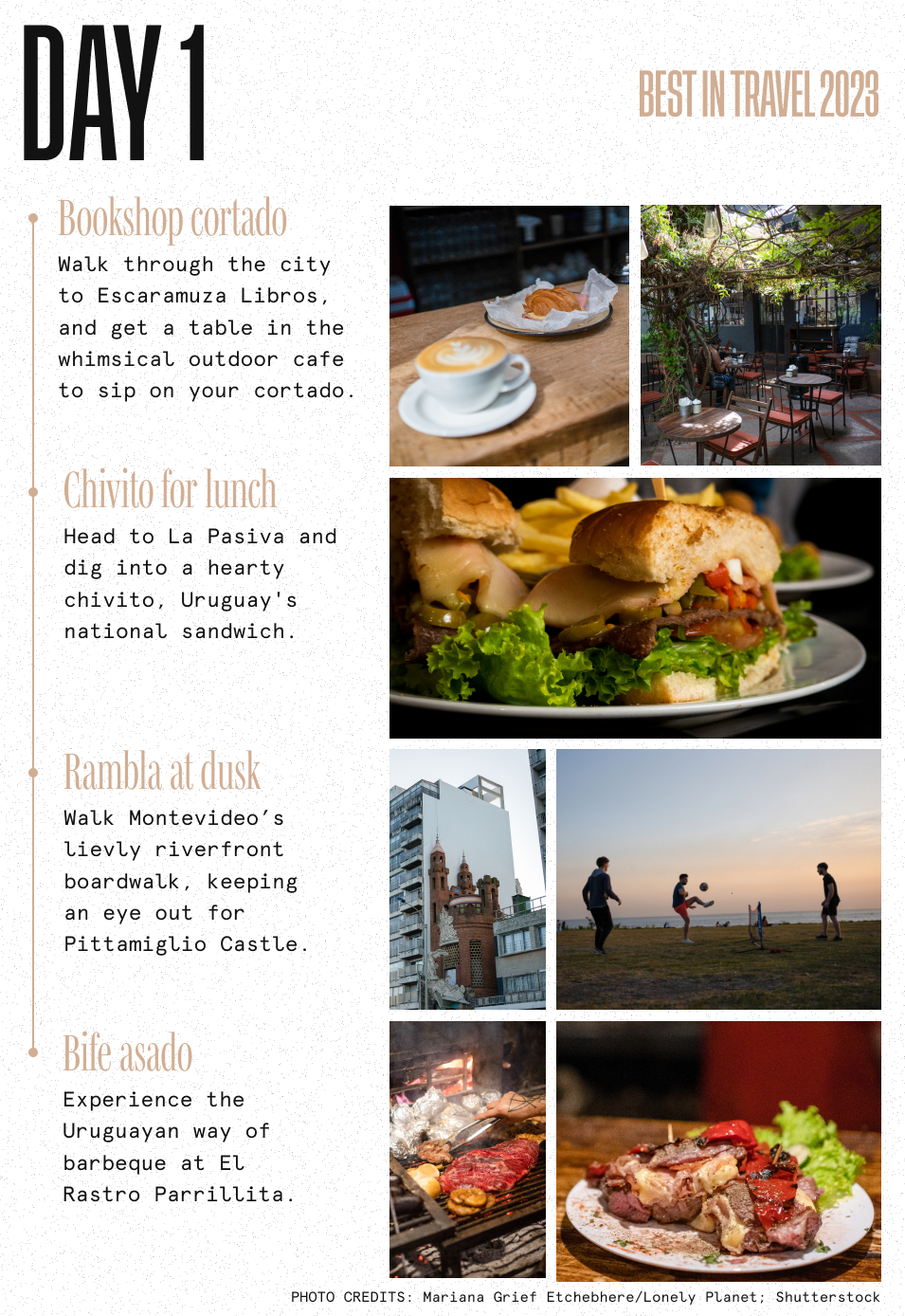 Cortado at a bookstore cafe

Most hotels include a breakfast spread with dulce medialunas (sweet small croissants), orange juice, toast, ham and cheese. Since Montevideo is flat and very walkable, head out for the 90-minute walk between the Ciudad Vieja and Buceo neighborhoods (you’ll likely be staying in one of them) to seek out a good cup of coffee. At Escaramuza Libros, walk through the picturesque bookstore and grab a table in the whimsical outdoor café behind it. Order a cortado – half milk and half coffee – and enjoy the slow pace of the Uruguayan lifestyle (yes, even in the “big” city) as you sip.

Work up an appetite before you indulge in Uruguay’s national sandwich, the chivito, for lunch. While the name translates to “little goat,” it doesn’t include goat meat, but rather comes piled high with beef, bacon, lettuce, tomato, eggs and cheese, and served over a bed of fries. Try it at one of Uruguay’s oldest fast-food chains, La Pasiva (the 18 de julio 1251 location is a 25-minute walk from Escaramuza). Snag a table by a window to people-watch as you dig in.

If you’re feeling sleepy after lunch do as the Uruguayans do and head back to your hotel for a leisurely siesta.

From your hotel, walk down to the Rambla, Montevideo’s riverfront boardwalk that at 14 miles is the longest continuous sidewalk in the world. You’ll pass the skate park, the Montevideo letters sign, the Holocaust Memorial and the mysterious Pittamiglio Castle. Aim to be around Punta Brava at dusk for top-notch sunset views over the Río de la Plata.

Believe it or not, 9pm is an early dinnertime in Uruguay. After sunset, order an Uber for the 10-minute drive to local haunt El Rastro Parrillita. Known for excellent cuts of meat and mid-range prices, this restaurant is where you can experience asado, Uruguayan barbecue, and enjoy meat prepared to order on the parilla (grill). Order the grilled provolone cheese and the meat of your choice such as the ojo de bife (steak) – then go all out for dessert with the flan doused in dulce de leche. 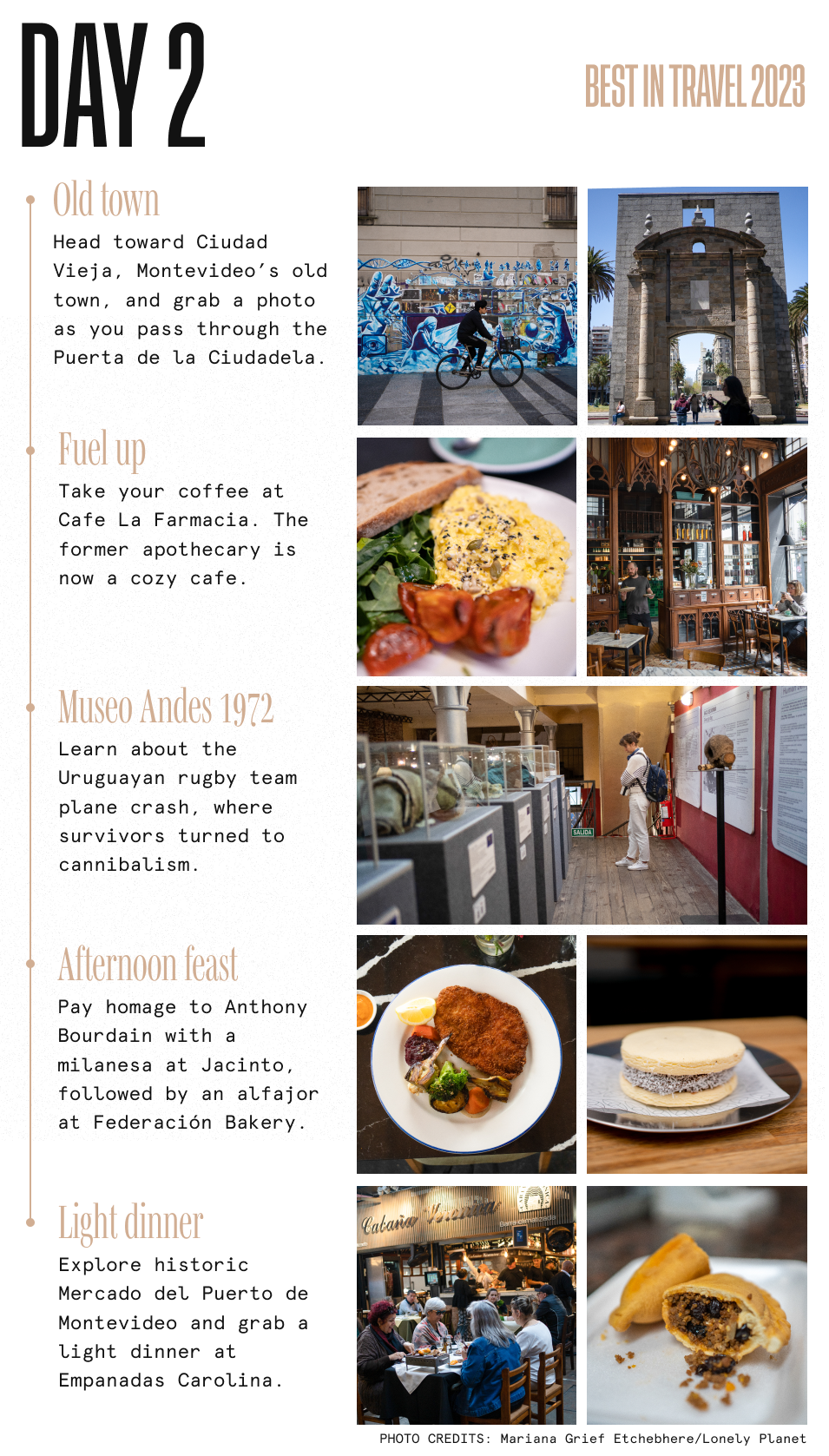 Dig into your hotel breakfast before walking through the Puerta de la Ciudadela and into Ciudad Vieja, Montevideo’s old town. Skip Café Brasilero (renowned as oldest cafe in Uruguay but lackluster) and instead take your coffee at Cafe La Farmacia, a former apothecary turned cozy cafe.

Nearby is the Museo Andes 1972 which tells the excruciating story of the Uruguayan rugby team that lost 29 colleagues in a plane crash. Sixteen passengers survived by turning to cannibalism until they were rescued 72 days after the crash.

Take a stroll down Sarandí, Ciudad Vieja’s pedestrian-only main drag – and think of the legendary Anthony Bourdain, who connected with Uruguay’s obsession with meat and loved morcilla blood sausage in particular. Dine where the chef did, at Jacinto, and be sure to order the milanesa, a traditional dish of breaded steak or chicken.

Skip the siesta and join in another national pastime, merienda. The mid-afternoon snack is usually a baked good such as a pionono (a rolled sponge cake layer with dulce de leche) or a ham-and-cheese sándwich de miga paired with coffee. In Ciudad Vieja, one of the best merienda spots is the Federación bakery. Try an alfajor, made with two flaky shortbread cookies stuffed with dulce de leche then rolled in coconut flakes.

Touristy and a bit expensive, the historic Mercado del Puerto de Montevideo, which first opened in 1868, is still worth visiting. Grab an early light dinner at Empanadas Carolina: try the beef with raisins, and ham with corn. Then stroll a few blocks to the Montevideo Wine Experience to learn about Uruguayan wine culture and try varietals from some of the country’s most celebrated wineries. Bodega Garzón, for example, has won international awards and was the first LEED-certified winery in South America. 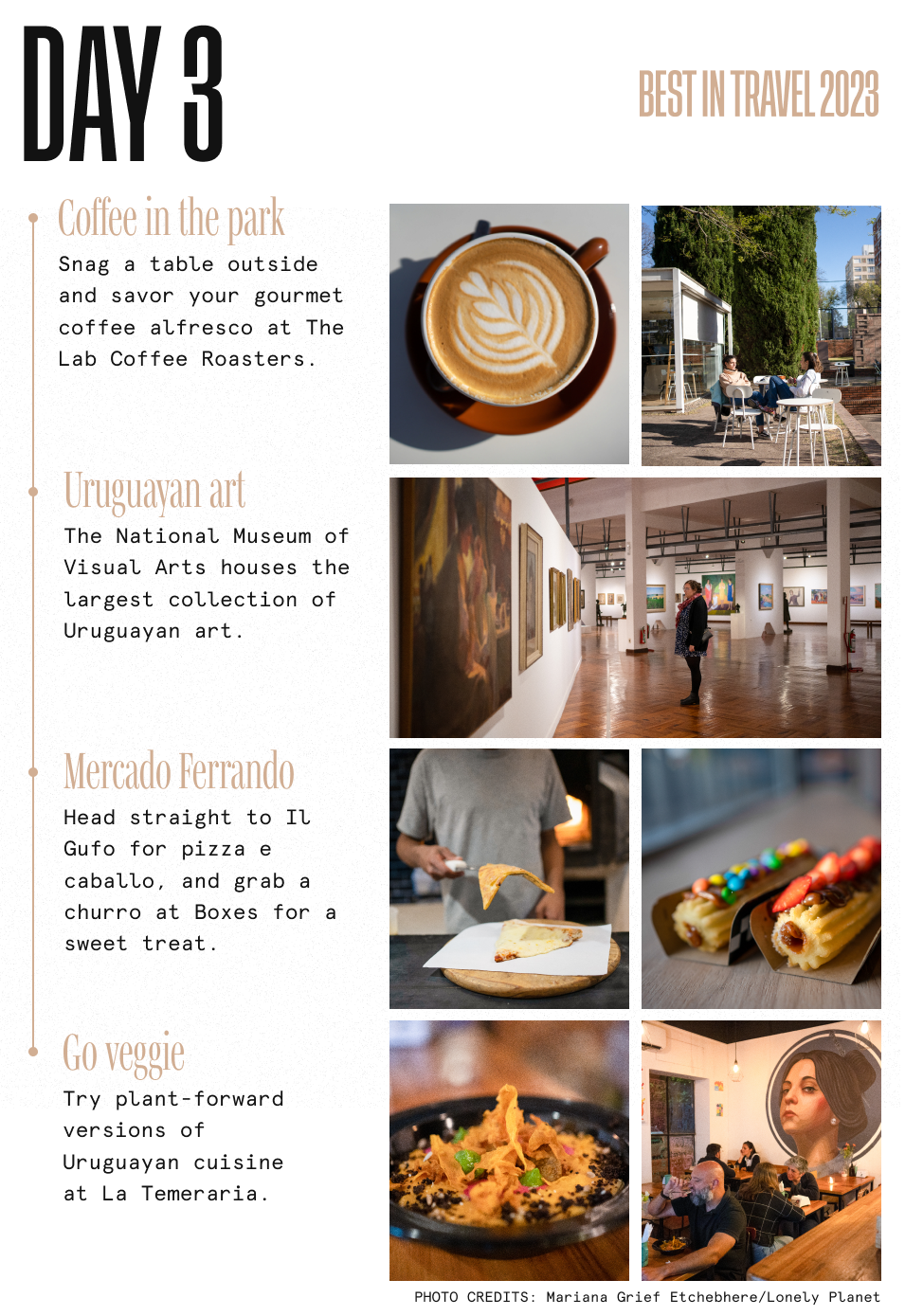 A modern day in Montevideo

After breakfast, walk through the verdant green urban space of Parque Rodó as you make your way to The Lab Coffee Roasters, located in the park, to savor gourmet coffee alfresco. Next door is the National Museum of Visual Arts, which houses a superb collection of Uruguayan art, including pieces by Pedro Figari and Juan Manual Blanes. After your cultural outing, treat yourself to a mid-morning donut at the new, women-owned In Her Oven bakery.

Food-hall markets are popular in Montevideo, with stalls offering parrillas, sushi, pizza, pasta, burgers, churros and more. From Parque Rodó, take a 20-minute walk to Mercado Ferrando and head straight to Il Gufo to try one of Uruguay’s culinary specialties: pizza a caballo. Almost half of all Uruguayans are of Italian heritage, which has strongly influenced Uruguayan cuisine. But don’t worry: this wood-fired-oven pizza isn’t made with horse meat, but rather with mozzarella and fainá (chickpea pancake) on top. Celebrate Uruguayans of Spanish descent with a dessert of dulce de leche–stuffed churros.

Although Uruguayans consume some of the most meat of any population in the world, there’s a burgeoning vegan scene in Montevideo, and a handful of plant-based restaurants. Go green for the night with plant-forward versions of Uruguayan cuisine like milanesa at La Temeraria. (And don’t skip the chocolate peanut butter cookie – you’ll hardly believe it’s vegan.) After dinner, walk down Blvd España to taste some of Uruguay’s best local beers at the Montevideo Brewery Company. 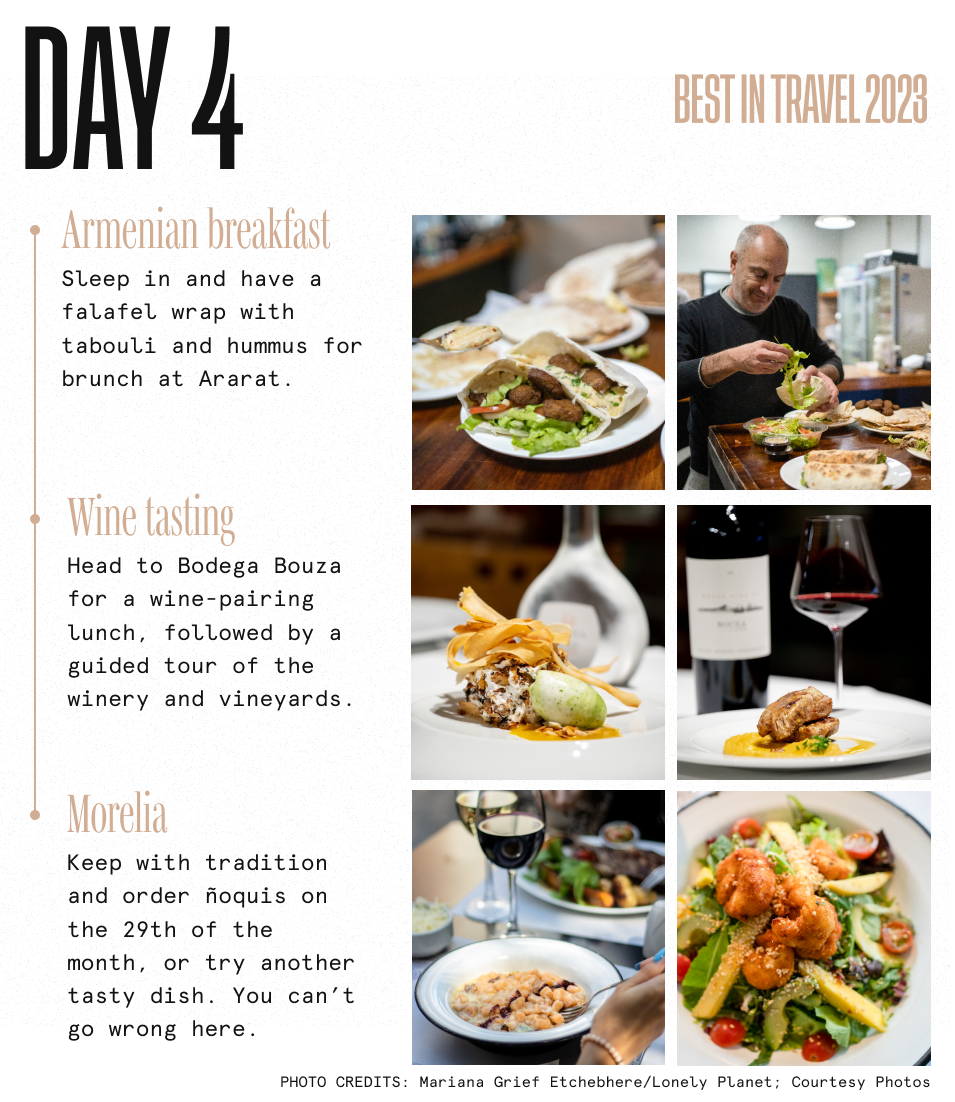 Montevideo has a large population of Armenian immigrants, and several have opened restaurants serving falafel, usually a breakfast food in the Middle East and neighboring countries. Since Ararat opens at 11, sleep in and then enjoy a falafel wrap with tabouli and hummus for brunch.

Hop in an Uber heading north: in under 30 minutes you’ll be at the beautiful Bodega Bouza. European colonization wreaked havoc on Uruguay, yet left behind a wine culture that has only recently begun to become internationally acclaimed. Indulge in the wine-pairing lunch – which might include a grilled duck magret paired with a glass of Monte Vide Eu 2019 – then take a guided tour of the winery and vineyards. Enjoy the afternoon soaking up the serene scenery before heading back to the city for dinner.

If you’re in Uruguay on the 29th of the month there’s only one dish to have for dinner: ñoquis. Dia de Ñoquis is a monthly tradition honoring the potato-pasta dish imported by Italian immigrants, who at the end of the month would only have potatoes and flour remaining, which they would use to make big batches to share with newer arrivals. The newcomers would try to pay; when the hosts refused, they would leave coins under their plates. We still do this each month for good luck. Continue the tradition with the superb potato dumplings at Morelia.

Want to head to Montevideo but wish there was someone to plan this out for you? Let Lonely Planet’s sister company Elsewhere take away some of the stress of planning by connecting you with the best local expert to craft your dream trip.

What to eat and drink in South Africa – Lonely Planet

Bergamo and Brescia are Italy’s capitals of culture for 2023