By DelhifundosSeptember 1, 2022No Comments7 Mins Read

It is that time of the year that a major part of India turns to festivities and worship. Durga Puja is the annual autumnal celebration of worshipping the Divine Mother, Durga. The beauty of Goddess Durga is that she is worshipped in various avatars all across the country. The style of worship, therefore, varies from one state to another (https://delhi-fun-dos.com/the-difference-between-durga-puja-and-navratri-festival-in-india/). In some states, it is piety and fasting while in other states it is gaiety and feasting.

This is a matter of pride for everyone in India. Not only does it augur hope for more foreign tourists to India, but it also guarantees that the Durga Puja in its present form would be propogated. To understand, why Durga Puja in Kolkata got this coveted tag, here is what you should know if you are in Kolkata during Durga Puja.

What to expect during Durga Puja in Kolkata?

Durga Puja in Kolkata, the capital of West Bengal is India’s response to the carnivals in Brazil. It is 5 days of fasting and feasting. While Durga Puja is a Hindu festival, the grand proportions of celebrations in Kolkata break religious boundaries and adopt a secular flavour. But it probably did not start like this.

History of Durga Puja in Kolkata

It is assumed that the first Durga Puja was held in the house of zamindar Sabarna Ray Chowdhury in the year 1610. To compete, many other zamindars (landowners) started celebrating Durga Puja in a grand manner. High-ranking British officers of the East India Company were invited to the festival. The arrangements would be even more elaborate to impress them. It is therefore clear that from its inception, Durga Puja had a secular celebratory character. 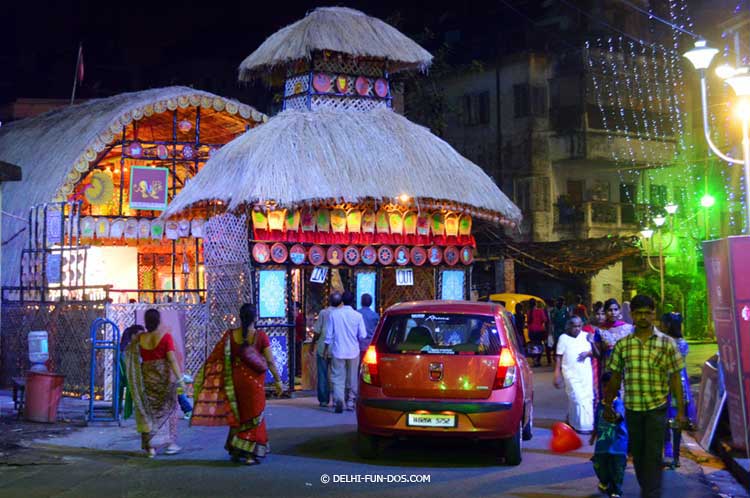 However, the common man felt left out from participating in the festivals. That led to the community Durga Puja or what is called the “Baroari” Puja. The word Barowari means – by 12 friends. Apparently, 12 friends from a locality pooled funds and organised the first Barowari Puja in 1909. Since then Durga Puja became a community festival where people of a neighbourhood would contribute and arrange a Durga Puja. Everyone irrespective of caste or religion was included in a Barowari or a community Puja. This trend caught on and Durga Puja in Kolkata now is a festival of the people.

The whole city is covered with lights and crafty pandals or marquees are erected in various parks and neighbourhoods to install the Durga idol. Goddess Durga is typically worshipped along with the deities Lakshmi, Saraswati, Kartik, and Ganesh. 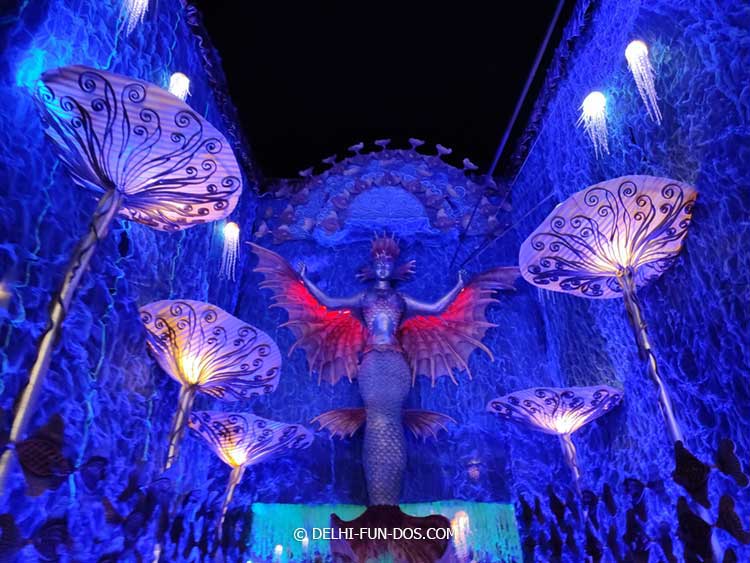 The pandal does not necessarily resemble a temple. It could be a design talking about a social issue like the lack of living amenities in slums or something totally abstract like a dream. We also loved a pandal depicting the underwater world. Kolkata becomes a live art gallery in this period.

An idol in any community Puja typically ranges between 5 feet and 10 feet in height. It is mostly made of straw, rope, and bamboo structure layered with clay and finished with paint, clothes, and ornaments.

Sometimes art overrides tradition and then the deity is made of offbeat material that could range from paper to scrap. Many moons back, a Durga Puja gained notoriety for making the idol with sugarcane fibre. These days, fashion designers and jewellery brands have come forward to offer special clothing and sarees for idols.

Yes, it is also about commerce. In fact, crores of funds roll into the economy and percolate even to the grassroots level on the occasion of Durga Puja. 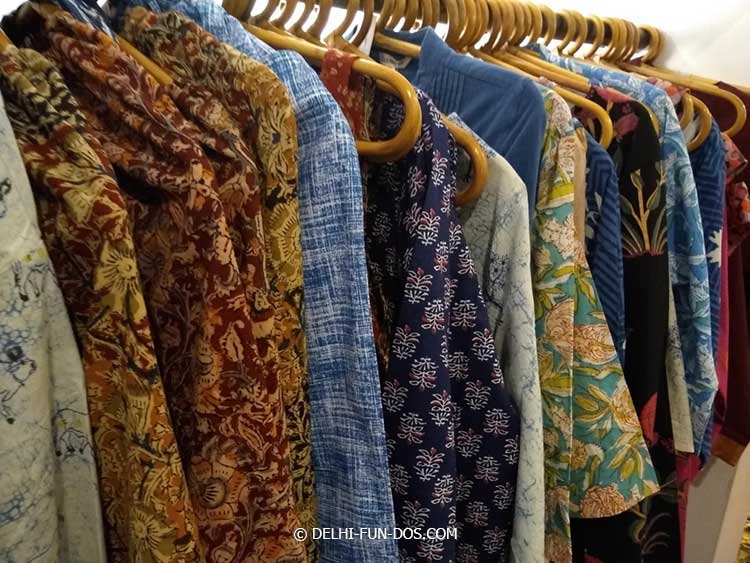 Only three kind of gifts would work for Durga Puja. – 1. Clothes, 2. Clothes and 3. Clothes. Unlike Delhi, there is no concept of fancy gift boxes of juices, cookies, and chocolates being exchanged. Save it for another time of the year. Clothes or money for buying clothes are the only and default gift item for Pujo. This is because Bengalis traditionally wear new clothes, ornaments, and even new footwear on all days of Durga Puja.

That said, there is no fixed kind of attire for Durga Puja. People who are actively involved may wear saris and dhoti kurtas. Some people wear Indian clothes like kurta pajamas while participating in the rituals. Again, there is no rule. You are free to wear just whatever you feel like during Durga Puja. In any case, it is a time to dress up and everybody on the road is attired in their best.

There is nothing called Durga Puja food in Kolkata. The ritual food offering, commonly called Bhog comprises khichuri, payesh, fritters, luchi, suji halwa, sweets, mishti doi, and so on. The devotees share the blessed food after the rituals are completed. Roadside food rules the roost in the afternoons and evenings. Chowmein, momo, biryani, Mughlai paratha, bhelpuri, phuchka (Gol Gappa) are hot favourites along with gallons of soft drinks and many cups of tea.

Big restaurants also bring out Puja special menu with special offers. This is a truncated version of their main menu focus being on popular fast food. Do be a little wary while eating out during Durga Puja. Sometimes, the food quality is not up to the mark.

No, they don’t say that in Kolkata very often. It’s not like how it is in Delhi when you say Happy Diwali to everyone during the festival. Even Happy Pujo won’t cut it. You say nothing during Pujo, just go out with buddies and watch in awe, all these beautiful pandals. Post-Dussehra or Vijayadashami, the classical greeting here is “Shubho Bijoya”.

What to do during Durga Puja in Kolkata?

The festival lasts for 5 days. People turn out on the streets in colourful clothes and the city is awake all 5 days and night. The celebrations reach carnival proportions and Public transport runs 24 X 7 from Shashthi to Dashami. We were surprised that 4 o’clock in the morning felt like 7 Saturday evening. 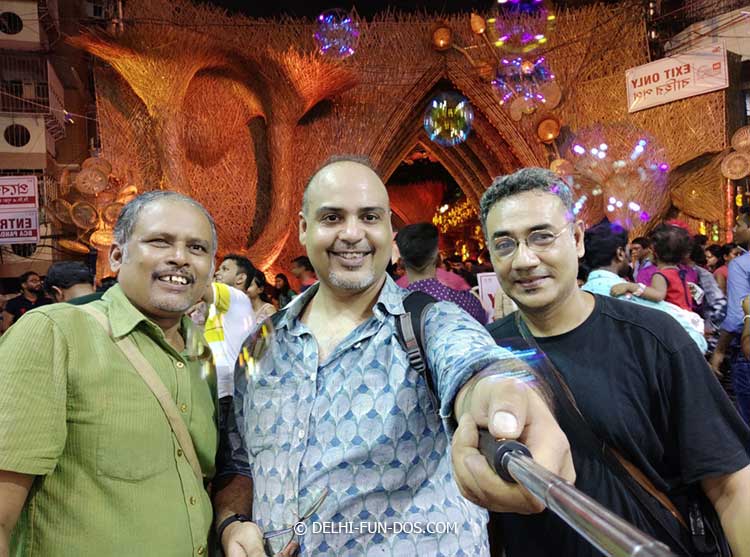 You can hop from one pandal to another viewing the artistic creations. You can stop for refreshments at the thousands of makeshift food and beverage stalls that pop up at this time. If you want to avoid the crowd, you can sit at a cafe and a restaurant and absorb the festivities around you.

There are fairs and exhibitions, theatres and cultural programs, Durga Puja food on the street or at restaurants, and get-togethers with friends and families. These activities are as inherent to Durga Puja as are the rituals.

UNESCO on Durga Puja in Kolkata

It is exactly this spirit of the celebration of Durga Puja that has struck a chord with UNESCO. The diversity of the Durga Puja festival makes it a celebration without any boundaries. Everybody is welcome to the grand occasion. Also, the unique marquees and idols are often made out of traditional art forms from all over India. 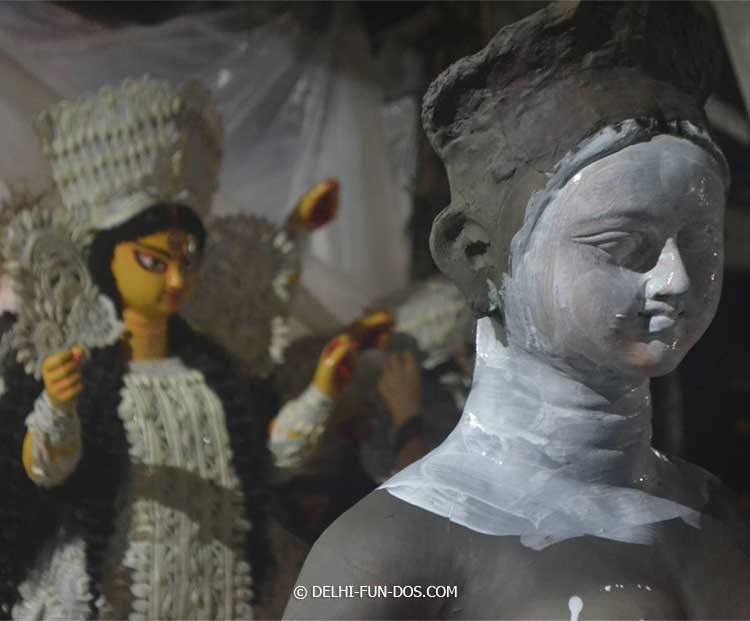 The classical clay idol is typically made at Kumortuli in Kolkata. However, modern versions of the idol are made at artists’ or sculptors’ workshops.

The pandals are often designed to reflect craft form from Bengal or any other part of India. Lippan art from Gujarat, metalwork from Bastar, woodwork from Gujarat, and Kathputli from Rajasthan are among the endless forms of pandals that we have seen. In addition to promoting the crafts, the various performances during Durga Puja also serve the cause of forwarding these art forms.

UNESCO’s recognition is therefore a nod to the inclusive nature of Durga Puja in Kolkata. Mere words are not enough, you must witness it for yourself to soak in the fervour.

A Road Trip From Delhi To Sariska And Alwar