Must See Places in Oxford 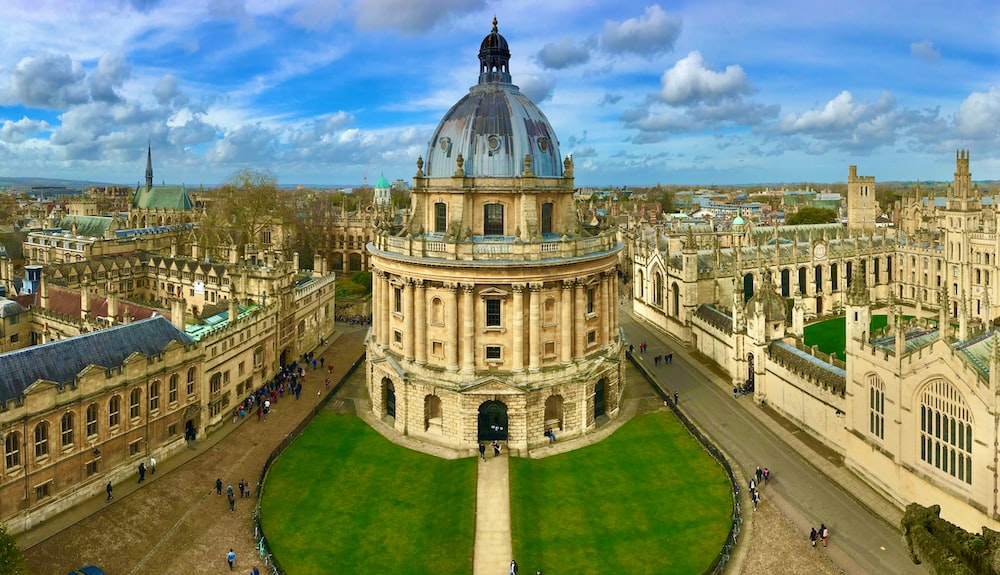 Must See Places in Oxford

Nestled in the South-East of UK, a little over an hour’s drive from London is the scenic city of Oxford. One of the most sought after places to visit in the UK, Oxford is home to world renowned universities, a castle, museums, and much more. It is also the place that several timeless creative geniuses called home, such as J.R.R. Tolkien (the well-known author of The Lord of the Rings), Stephen Hawking, and Lewis Carroll to name a few. So, without further ado, let’s dive into some of the must-see places in Oxford.

Unsurprisingly, the number 1 place on everyone’s sightseeing list when you come to Oxford is the universities. The iconic Radcliffe camera building, along with other sections of the university have been featured in innumerable films and TV shows such as Marvel’s Eternals, Harry Potter, A Discovery of Witches, and many more. You can explore it all on your own, or can opt to join walking tours that are conducted by university alumni, which allow you to get a deeper understanding of the architecture and day-to-day activities that take place there. There are also well-known locations within the university campus, including the Christ Church Meadow and Magdalen college and grounds that you can cover in a single day.

If you want to visit a place that is sure to keep your children occupied for an entire day, then the Oxford University’s Museum of Natural History is the place for you. On entering, you are greeted by the large skeleton of a dinosaur! And that is just the beginning. You will find many different fossils here, including exhibits of animals and birds, from dinosaurs to dodos. It is also attached to the Pitt Rivers Museum, which has a large collection of prehistoric and ancient artefacts, including weapons and clothing. And best of all? All of it is completely free of charge! You can visit both museums without spending a single penny while you’re there. Educational and cost-effective – the best of both.

The University of Oxford Botanic Garden is the oldest one of its kind in Britain, and has a diverse collection of plants. The Botanic Garden has a walled garden, a glasshouse for plants sensitive to UK weather, and a lower garden. The mesmerising garden was the inspiration for Lewis Carroll’s stories in Alice’s Adventures in Wonderland. Needless to say, the best time to visit the Botanical Garden is in the summer or late spring, when most of the plants will be in full bloom to view.

Coming to the UK and not visiting castles is a missed opportunity. Almost every major city or district has a well-known castle, and Oxford is no different. Oxford castle and prison was built in 1073, with it serving as a prison till as recently as 1996. Most of the castle was destroyed in the Civil War in the 18th century, but the other sections were converted into prisons. The ruins of the castle are yet another attraction that can be viewed within the city centre, as it is walking distance from the universities and museums.

Another attraction that cannot be missed in Oxford is England’s oldest public museum, the Ashmolean Museum. This museum houses original drawings from Leonardo da Vinci, paintings from Picasso, Egyptian mummies, ancient Greek coins, and much more. There are also frequent exhibitions held here, as it tries to acquire or exhibit major artefacts from around the world. For older children and adults that are enthralled by archaeology, this is the place to go.

Set in beautiful Oxfordshire, less than an hour’s drive from the city centre, Cotswold Wildlife Park and Gardens, or Cotswold Zoo as some call it, is yet another fantastic place to visit as a family. It has several unique and exotic animals, including penguins, meerkats, monkeys, lemurs, anteaters, giraffes, tarantulas, and much more. It even has the white rhinoceros, a species you may not be able to see in most other places. You’ll probably need to set aside an entire day to visit this zoo, though you won’t regret it, as it is set in a picturesque location which is perfect for a picnic as well.

So, these are some places that you must visit if you come by to Oxford. Within Oxford, a 24-hour, or 48-hour pass of a Hop-on Hop-off bus will allow you to visit most of the places on this list, and more. The best part is, most of the city is well-connected by bus, and several areas are walking-friendly, allowing you to explore much of the city centre on foot.

This city is so close to London, that you could take an early morning bus from London, look around Oxford, and take the late night bus back into London without checking out from your room. Even if you choose to make Oxford a single day stop, you’ll be sure to go back with memories that will last you a lifetime.

Japji Travels has been featured in Twinkl, as part of their Top Indian Travel Bloggers 2023

Best things to do in Hong Kong Foreign Destinations

Top things to do in the Maldives for couples Foreign Destinations

Top places to explore in France