Should you visit Cork or Waterford? 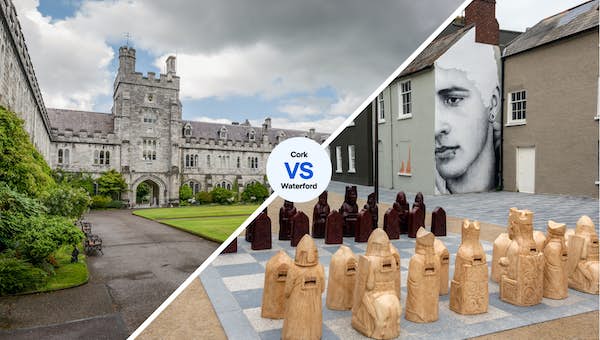 You’ve had your fill of  Guinness, castles and rolling green hills on your sojourn across the Irish countryside. And you’re probably craving some city time right about now.

Since Dublin is where most visitors start off their trip, we recommend seeking out the Irish town spirit in a regional city – and two cities come immediately to mind. If you have to pick one, would it be Cork or Waterford?

Two expert writers have their own strong opinions. We’ll let them make the case from here.

The choice is clearly Cork

A writer and professor who’s written books on Éamon de Valera, Brendan Behan and Muhammad Ali, Dave Hannigan is now based in New York – yet eternally connected to his hometown of Cork.

Nearly a quarter century after I departed Ireland for New York, my mother’s sage advice still lingers. “Never ask someone if they are from Cork, boy,” she advised. “If they are, they’ll tell you, and if they’re not – well, you don’t want to embarrass them.”

Every summer I return – the bashful prodigal son, the wide-eyed day tripper – and am always thrilled to see that amid so much change our (ahem…) innate self-belief remains intact. For natives, the very notion of comparing the People’s Republic of Cork to Waterford as a destination would be as wrongheaded as not knowing that Murphy’s Stout, the local nectar, is far superior to Guinness, its more globally famous rival. The world should really know better.

Ivy-clad University College Cork, Victorian quadrangle and all, sprawls on the doorstep of a city bisected by two meandering branches of the River Lee and spanned by so many storied bridges. Stand on Nano Nagle (named for the founder of the Presentation Sisters), and gaze upriver at St Fin barre’s Cathedral, a three-spired Gothic Revival wonder that my philistine American sons always compare to the Disney castle.

From there, stroll up Barrack St. As you climb the wooden ramparts of Elizabeth Fort, try to imagine the plight of a nervous guard standing sentry there in the 17th century. Once you’ve imbibed enough history, nip into Tom Barry’s, a nearby charmer of a pub with a beer garden that offers with a highly regarded outdoor pizza oven and conversations with an eclectic clientele.

While the new, hipper Marina Market recently sprung up in the docklands to cement Cork’s reputation as a foodie’s paradise, the English Market has long attracted international television travel shows (and even, famously, Queen Elizabeth II). Expect a smorgasbord of local produce like artisanal cheeses and black pudding. The variety of fresh fish on offer serves as a reminder Cork is a port town that has always faced south toward Europe.

Hence the Huguenot Quarter, a warren of medieval laneways first settled by 18th-century French religious refugees, today speckled with restaurants and cafes. Its narrow streets wend toward a single block of culture containing the immense Crawford Art Gallery and the Opera House, which shares a quayside with Vibes & Scribes, the last, great secondhand bookstore in town.

The presence of not one but two prison museums – City Gaol on the north bank and Spike Island squatting low in the harbor – reflects the city’s troubled past and its enduring, fiercely independent spirit.

Waterford is a place you can visit. Cork is a state of mind. Something you experience.

Amy O’Connor is an Irish writer and comedian who takes the appeal of Waterford very seriously.

For a long time, Waterford was something of an afterthought. Despite being Ireland’s oldest city – yes, it is a city, more than just a county – and having an abundance of amenities on its doorstep, it lived somewhat in the shadow of its more boastful neighbor, Cork. Post-pandemic, however, this sleeping giant has arisen and people have cottoned on to what Waterfordians have always known: that Waterford is bloody class.

For decades, Waterford was synonymous with one thing and one thing only: Waterford Crystal. The firm’s closure in 2009 devastated the city – but Waterford is nothing if not resilient, and it dusted itself off and set about crafting a new identity. The result? A rejuvenated city that hums history and pulsating with promise, one where heritage and modernity live harmoniously side by side.

Central to Waterford’s identity is its rich history. After all, this is a city where medieval ruins sit adjacent to chippers and nightclubs. To acquaint yourself with Waterford’s past, start at the Viking Triangle. Marvel at Reginald’s Tower, the majestic stone fortress that has loomed large over the quayside for over 800 years. Stop into the Medieval Museum to admire the treasures unearthed over the decades. Take a photo next to the statue of Aoife and Strongbow – a couple whose Waterford wedding was so seismic that it helped precipitate the Norman Invasion. (And you thought Harry and Meghan’s wedding was dramatic.)

After that, it’s time to appreciate the city in its contemporary form. With a largely pedestrianized city center and enviable public spaces, Waterford lends itself particularly well to exploring and people watching. Grab a coffee from Arch Coffee, then plop yourself down on a bench in John Roberts Sq to watch the world go by. Pay a visit to the Book Centre, a cinema–turned–book shop that ranks among the best in Ireland. Take a stroll down the iconic mile-long quay and have a browse in independent artisan stores like CC Creatives and Bébhínn.

Feeling peckish? Waterford’s culinary offering is positively cosmopolitan these days. Poke your head into Phoenix Yard Market and sample everything from Afro-Caribbean street food to hearty Hungarian fare. For a sit-down meal, don’t look past an atmospheric supper in the award-winning Everett’s or the sensational tasting menu in The Old Couch Café. Wash it all down with a pint from Tully’s, preferably something from local outfit Hopfully Brewing Co.

One of Waterford’s biggest assets is its proximity to the great outdoors. In no time, you can find yourself ambling down the promenade in Tramore or feasting on fish and chips in Dunmore East. The real jewel in the crown, however, is the Waterford Greenway. Rent a bike and lose yourself along this glorious trail, which takes you from Waterford City to Dungarvan, with plenty of pit stops along the way. To paraphrase Lou Reed, this has all the makings of a perfect day.

The great Waterford hurler John Mullane once tearfully remarked, “I loves me county.” And with good reason; there’s plenty to love. We haven’t always been the best at building ourselves up – certainly not in comparison to our Corkonian counterparts. But often those who shout the loudest have the least to say.

Waterford City speaks for itself.

The International African American Museum opens in Charleston in 2023