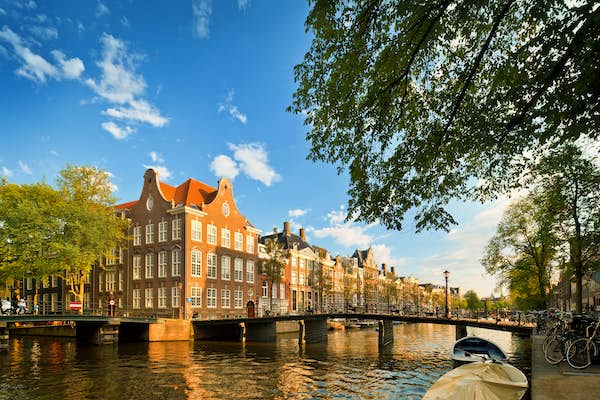 One organization is offering a way to really get to know Amsterdam’s famous waterways – by helping clean them.

Erik Fransman has an important reminder as our boat makes its way down one of Amsterdam’s famous canals: no picking up dead animals, and don’t try and snag anything larger than the fishing nets. He is scanning the horizon as he launches into a story about the skinny white building we’ve just passed. It’s the narrowest house in Amsterdam, Fransman explains, barely wider than its front door because houses were taxed on their façade width in the Dutch Golden Age.

But then, mid-sentence, he stops. “There,” he says, as the other tourists and I turn to follow his gaze. Further down the Singel canal, a half-filled plastic soda bottle bobs in the water. Fransman makes a beeline for it with our boat.

One of the passengers leans over the side with his fishing net to scoop the bottle out of the murky canal, grabbing a nearby plastic grocery bag and food wrapper too. He sorts the bounty by garbage type and dumps it into a set of bags on the boat.

Canal tours are among the most popular activities for tourists visiting Amsterdam, but I’ve joined Fransman on one hosted by the organization Plastic Whale, a social enterprise working to make the world plastic-free. It’s a tour where sightseeing is secondary. Our main purpose here is to help clear plastic from the city’s waterways.

Soon others on board are also inspecting the sun-drenched waters like we’re on some sort of plastic-hunting expedition. Fransman peppers our quest with occasional tales of various sites, including the Anne Frank House, a bar that’s tilted forward and the city’s widest bridge, which used to house a prison. Our nets fill up especially fast when fishing in the corners of the canals, a hotbed for garbage.

“Once you’re on the water and start to take out plastic, it’s kind of addictive,” Fransman says. “You don’t want to leave anything.”

Fransman says the kind of enthusiasm I witnessed on my tour is not unusual. He sees it every week leading plastic fishing trips for Plastic Whale.

Most tourists like the combination of spending time on the water, hearing a few stories about the city and doing something good, says Fransman, who has worked with Plastic Whale for eight years. “They realize that though the canal looks clean on the surface, there is so much garbage in the water, so there’s a new awareness.”

“I saw plastic waste as a fast-growing, very complex problem, a worldwide problem,” said Marius Smit, who founded Plastic Whale after seeing the impacts of plastic pollution in Southeast Asia 20 years ago. “I wanted to do something very concrete about a problem that was on the rise.”

Once plastic enters the oceans through rivers and other waterways, it doesn’t fully decompose. Instead, it can accumulate into floating garbage patches in the water or break down into microplastics, which can harm the environment, marine life and humans. Of the seven billion tons of plastic waste produced globally so far, less than 10 percent has been recycled. One projection shows that plastic waste entering aquatic ecosystems will almost triple, from 9-14 million tons per year in 2016 to 23-37 million tons per year by 2040, unless the ways plastic is produced, used and disposed of change.

Plastic Whale collects as much of this waste as possible through fishing trips in Amsterdam and Rotterdam to prevent plastics from entering oceans in the first place. In Amsterdam, Plastic Whale organizes school trips and corporate team-building outings. While the organization used to operate weekly trips for tourists, they’ve recently switched to offering charters by appointment. The organization’s mission aligns well with that of the city of Amsterdam, which was the first city to join WWF’s Plastic Smart Cities initiative, with the aim of wiping out plastic pollution by 2030.

In 2019, before COVID-19 temporarily halted the tours, the company fished out over 40,000 PET (polyethylene terephthalate) plastic bottles with the help of nearly 18,000 people on their trips. Besides PET bottles, Plastic Whale’s most fished-out trash in 2020 and 2021 were cigarette butts, soda cans and face masks.

Started in 2011, Plastic Whale’s mission is not only to collect plastic and educate people about the environment, but also to transform collected plastic into new creations.

Plastic Whale repurposes the collected PET bottles into foam and felt, which are then used to make modern office furniture and the very fishing boats they use for plastic collection. Each of Plastic Whale’s 14 boats is unique, sponsored by a different company or organization. The floor of our boat, sponsored by the city of Amsterdam, was adorned with red and white fished-out bottle caps depicting the city’s flag.

“We are very much focused on positivity and creation: that’s why we show that what we take out of the canals or out of nature can be transformed into a beautiful product, that plastic shouldn’t be regarded as valueless waste but as a valuable raw material,” Smit said. “If people start looking at it within the whole chain, people will use plastic differently.”

While sightseeing is part of the trips, there’s little time to take in the scenic views during our plastic fishing outing. There is always a plastic bag, glass bottle, takeout container or some other garbage up ahead to be fished out. Some onlookers give a thumbs up or shout “thank you” as we pass by.

While paying to pick up trash may not be everyone’s idea of a vacation, Fransman says interest in their plastic fishing trips has exploded since 2017, partly because people are more concerned about the environment and sustainability. Their biggest year for plastic fishing was 2019, and the tours continued to be popular last year once they reopened after the lifting of COVID-19 restrictions.

“Many tourists who come to Amsterdam, or any place in the world, also want to take a bit of responsibility for keeping the place they visit clean and safe,” Smit said. “It’s incredible how many people step onto our boats, and they’re just so happy and proud when they step off.”

Smit says that tourist hotspots like Amsterdam can leverage this interest to support more responsible travel. “Every part of the tourism industry could play and should play a part in solving local problems.”

By the end of our two-hour fishing trip, we’ve collected three bags of PET bottles, two garbage bags with other plastics, two bags of general waste and nine pieces of glass. Among the more typical trash are also some surprises: a black backpack, an orange and white inflatable beach ball, and an ornament of a gold dog wearing a blue and white shirt and top hat. Each fished-out item provides a glimpse into the happenings of a city marked by its waterways. But despite the big haul, we haven’t grabbed it all. If we pick up everything, Fransman says, we’ll never make it home.

“We are here every day, and still there’s more to take out of the canals,” Fransman said. “The best days are when we don’t take anything from the canal. But that hasn’t happened yet.”

Spending diaries: a weekend in Porto