By VictoriaDecember 1, 2022No Comments5 Mins Read 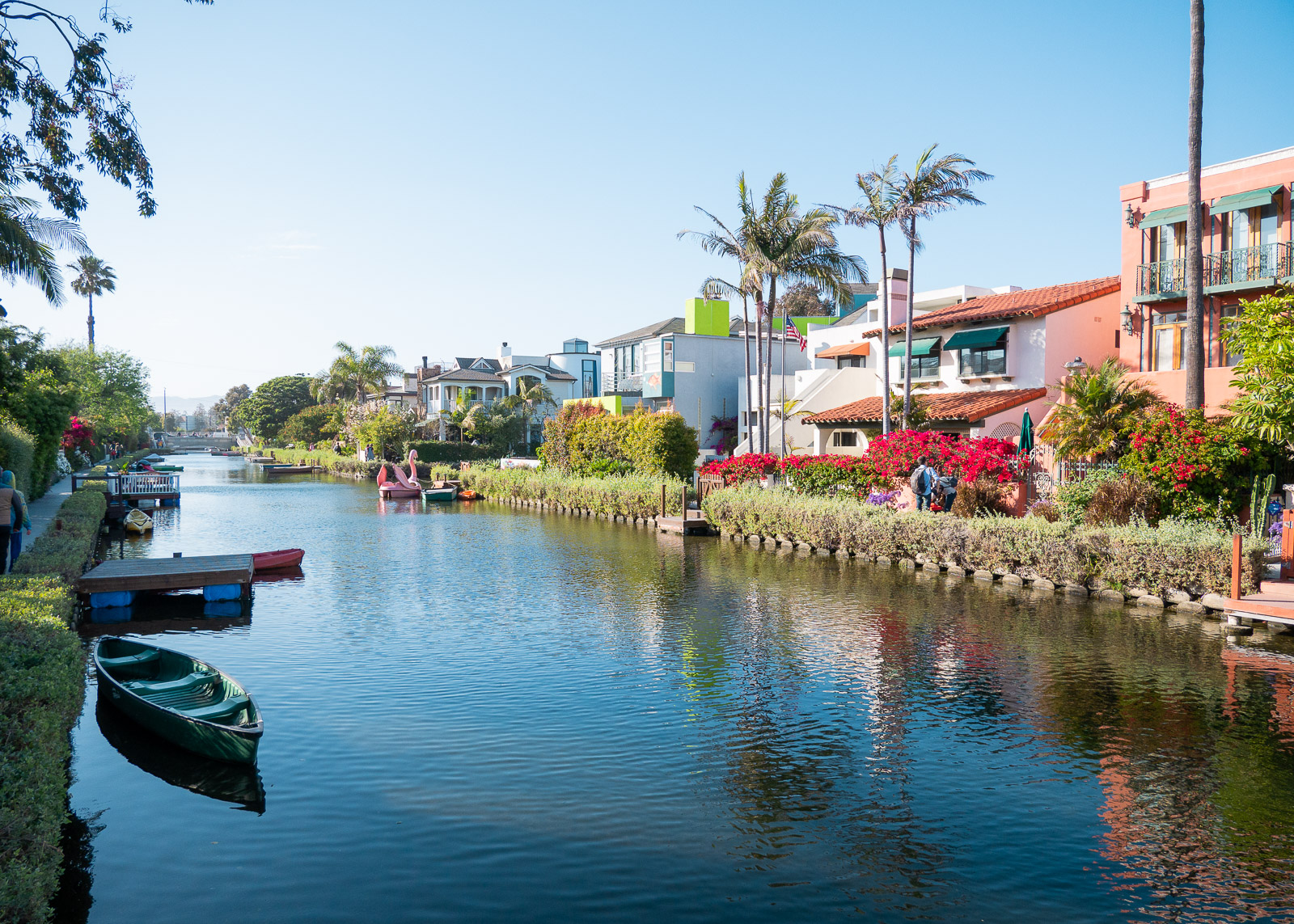 Heads up: some of the links on this site are affiliate links. If you click and make a booking or purchase, I’ll make a commission (at no extra cost to you). I partner with companies I personally use and the $$ goes towards creating more awesome, free travel content.

If you can’t fly all the way to Italy to see the canals of Venice, you can still find some beautiful canals right in the heart of Los Angeles!

The Venice Beach canals, known as the “Venice Canal Historic District” is a historic residential district with several man-made wetland canals. It’s an incredibly picturesque and tranquil area that feels a million miles from the chaos of Hollywood or the Venice Beach Boardwalk. While you can’t ride a gondola here, it still gives a taste of Europe without having to leave the US.

Venice Beach is one of the most popular neighborhoods in LA and is definitely worth including on your Los Angeles itinerary. After you’ve walked along the boardwalk and stopped to take a photo with the famous Venice Beach sign, I’d highly recommend strolling around the canals and snapping pictures of all the pretty bridges and houses.

In this Venice Beach Canals guide I’ll give you a little info about the history of the canals, as well as some practical info for your visit!

Where are the Venice Canals, Los Angeles?

The Venice Canals are located in Venice Beach, behind Pacific Avenue and south of S. Venice Boulevard. Once you’ve visited the famous Venice Sign, you’ll want to keep walking south until you reach the canals.

Here’s a map so you can see more accurately where they are:

Parking near the Venice Beach Canals

If you’re driving there are a few parking lots nearby.

There are also lots at the following addresses:

History of the Venice Beach Canals

So how did the Venice Beach Canals get there? Well, in the early 1900s tobacco mogul and property developer Abbot Kinney drew up plans for his Venice of America project, which sought to bring a slice of Venice in Italy, to Los Angeles in southern California. He had visions for an upscale, seaside community complete with imported gondolas and gondoliers to ferry people around.

The development opened in 1905 and featured numerous man-made canals as well as hotels and residential properties. It was a huge hit and became a very desirable place to live. The community even had a miniature train and an amusement park!

However, by the 1920s automobiles became increasingly popular and so some of the canals were filled in to make way for roads. By the 1940s the canals had fallen into disrepair and they remained in a poor condition for the next 40 years. After numerous failed plans to restore them, the canals were eventually fully renovated in 1992 and re-opened in 1993.

Before 1929 there were thirteen canals in total and the area was about 3 to 4 times bigger than it is today. Today there are just six canals and the remaining seven were renamed as roads by the City of Los Angeles. The traffic circle at Pacific and Windward Avenues is located on top of the former Venice Lagoon.

Visiting the Venice Canals is one of my favorite things to do in Venice Beach! You can easily spend an hour or two crossing the bridges, taking Instagram-worthy photos and admiring the beautiful houses. Just remember, this is a residential area though, so you’re walking by people’s homes. Always be respectful and don’t take pictures of residents in their yards.

You’ll be amazed at how peaceful and quiet it is in this part of town. There are nine pedestrian bridges in total as well as three residential islands which are all listed on the National Register of Historic Places. If you enjoy birding you can also spot a variety of birds including herons, egrets, coots, pelicans.

Around the Venice Canals you’ll see an eclectic mix of houses, ranging from beach bungalows to contemporary buildings with large glass windows.  They’re painted in a wide assortment of colors and usually have an outdoor terrace or front yard, plus a small dock for boats, kayaks or canoes. Being right by the beach, the Venice Canals is a very sought after location, with properties costing millions of dollars!

While there are no boat rentals at the Venice Canals, you’ll often see people stand up paddleboarding on the water.

FAQs About the Venice Beach Canals

Why does Venice Beach have canals?

The Venice Beach canals were created by developer Abbot Kinney as part of his Venice of America project. The project entailed building a residential development that would bring a taste of Italy to America. Kinney and his crew dug out 16 miles of canals out of the marshes to recreate the canals of Venice.

How many canals are in Venice Beach?

How much does it cost to go to the Venice Canals?

Visiting the canals is absolutely free!

Can you swim in Venice Beach canals?

No, you can’t swim in the Venice Beach Canals. Swimming in them is strictly prohibited.

Culebra Ferry: Important Tips for Riding the Ferry to Culebra

Important Tips for Riding the Ferry to Culebra

Why Dubai Festival is So Popular?